Lior Suchard Manages is Entertainment and Career the Right Way

LOS ANGELES - Aug. 29, 2018 - PRLog -- A captivating entertainer, Lior Suchard can make you think twice about anything, your birthday, your first kiss and whether or not mind readers and mentalists are for real. His success depends on this, and he is successful.

"We have been so happy to work with Mike Ladge over the years. His support, guidance and leadership are key and his integrity greatly appreciated. It's no surprise to us that he has worked with Lior Suchard and so many other talents entertainers and sports personality."

We wanted to find out what he thinks about his career, leadership and management of his success and development as an entertainer and were excited to speak to him on the phone while he was in California recently. 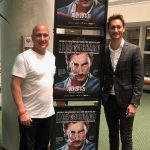 With the success he has found, from reality TV and Uri Gellar to selling out stages all over the world, how does he slow down and make sure to take things seriously, manage his money, appearances, family etc.? He's a busy guy.

"It is true, that finding a close advisor to answer questions one that knew the right people to help me was important. When I arrived in Los Angeles I was very happy to work with Mike Ladge who introduced me to the right people, the right circle and help me make important decisions effectively..."

Lior believes in being true to ones self, and as a young man he began to perform with school groups and parties and soon after joined the Israeli Military. He jokes even today, he's not allowed to tell you what he did during that time.

He is a dedicated entertainer, a Mentalist who after his time in the service began performing for local TV Morning shows in Israel and found his breakout opportunity with The Successor, a reality show with Uri Gellar.

I asked Lior about the many influential friends he has made through his entertainment. He is quick to explain he does not talk about those friendships. That is very personal. It's clear he is not that type of superstar. He knows a lot of people and is around many successful entertainers, sports stars, world leaders and business men and women and he protects those friendships.

Whoever he is entertaining and working with, many you can find on his Instagram page, like Gerard Butler, Kim Kardashian, Jerry Seinfeld, Sting and the list goes on he urges everyone to think positive, because you never know who is reading your mind. Suchard is a positive thinker, it's how he lives. He is a positive person that has made it to the world stage and takes every step carefully.

Speaking with Lior it's easy to tell he is a laid back and easy going person that takes the management of his business seriously.

He relies on his team to help him make decisions and credits his financial advisor Mike Ladge with helping make early decisions that steered him clear of doing neighborhood birthday parties and keep the eye on the real goal, Las Vegas, Europe, Asia and large global venues.

Lior tours around the world and is currently performing in Israel after finishing a run in the United States. He performs regularly in Las Vegas as well.

But its clear, that even if he was just entertaining at a local birthday party, he would still be a neighbor, friend and family guy, doing the right thing and loving life the whole time.

Lior will be entertaining for years to come, and you can see him regular on TV from Late Night Shows to Morning Shows like Kelly and Ryan. Follow Lior on Twitter @LiorSuchard or Instagram @LiorSuchard

Warning: count(): Parameter must be an array or an object that implements Countable in /home/thetcw5/public_html/wp-includes/class-wp-comment-query.php on line 405

Warning: count(): Parameter must be an array or an object that implements Countable in /home/thetcw5/public_html/wp-includes/class-wp-comment-query.php on line 405
No comments

View all posts by: admin


Warning: count(): Parameter must be an array or an object that implements Countable in /home/thetcw5/public_html/wp-includes/class-wp-comment-query.php on line 405